You asked and we answered questions around workplace equity best practices, pay transparency, and other issues in our recent “Ask the Experts: Workplace Equity Trends and Best Practices” webinar. Our panel of experts featured Syndio’s:

The team took questions from attendees on both U.S. and global workplace equity best practices. We had so many great questions that we made a Part 2.

In her opening comments, Maria explained, “When we say ‘workplace equity,’ we at Syndio define that as pay equity plus opportunity equity. Another way to say it, in terms of how you might hear it described in the media is: pay equity (or equal pay for equal work) and the median pay gap, which is solving both pay equity and opportunity equity.”

Q: Can you explain the difference between median pay gap and pay equity?

A: Rob Porcarelli illustrated the difference between median pay gap and pay equity using the movie The Wizard of Oz. The actors portraying Tin Man and Scarecrow in that production were paid $3,000/week and the Lion got $2,500/week, while Judy Garland, playing Dorothy, was paid $500/week. 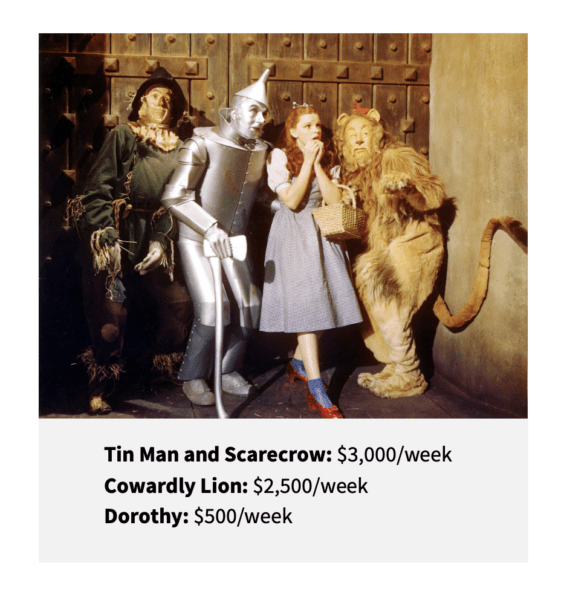 From a pay equity standpoint, he explained, the producers could say, “Well, Dorothy’s from Kansas, there’s a geographic differential there, and the rest are from Oz.” Geographic differentials are a legitimate explanation, but because the only actor in Kansas was female, they are disaggregating, or what Rob called “divide and hide.” That would allow the producers to say “Oz has achieved 100% pay equity.” But if you were to examine the median pay gap, the headline for the same data would be “Lead women in Oz earn 18 cents on the dollar of their male peers.”

“If you’re a CEO, think about standing up in front of your Oz people and explaining ‘We’re at 100% pay equity, but Dorothy is earning $0.18 on the dollar.’ Imagine having to articulate that difference and why you pay less than $0.20 on the dollar, but you’re still fine,” Rob added.

He explained this difference is what median pay gap disclosure drives. And that is why, as this becomes more and more mainstream, companies are having to first lean into pay equity; because the first priority must be ensuring that the company analyzed based on race and gender, and found that it does not pay differently because of race and gender.

Q: How are you coaching companies on their communication strategy?

A: Companies need to think about a two-pronged communication strategy, Maria responded. First is equal work for equal pay: you have to communicate where you stand on that to your employees and help your people managers not only to absorb it for themselves but also be able to explain it to their teams. Second is the median pay gap, which is more difficult because it is a reflection of opportunity. “Don’t think of it as a median pay gap,” Maria said, “but as an opportunity gap.”

Key to communicating where your company stands with your median pay gap, Maria explained, is to have concrete action steps around:

Pay equity is important — especially ensuring that you’re reviewing it on an ongoing basis and particularly around starting pay — but the median pay gap is a much longer journey, Maria said.

For companies afraid of pay transparency, Maria pointed out that employees are talking about salary already. They’re creating Google spreadsheets, sharing their salaries on TikTok, and talking to each other. This is going to be more and more common, so she pointed out that employers should set the narrative and inform their people why they pay what they pay. They also need to arm their people managers with the tools to have productive conversations without being caught off guard. She mentioned that Gartner did a study showing that if you don’t have these conversations, your employees will assume your pay gap is 2-3 times worse than it is. It benefits employers to own the narrative and garner trust through transparency, Maria concluded.

Q: What are some of the common practices that cause pay gaps?

A: Starting pay is the single most important factor in a pay equity analysis according to labor economists, Rob explained. He said that if you controlled for starting pay from the beginning, you could have 100% pay equity. As an example, if Rob and Ritu started at the same time and Rob was paid $10,000 more, Ritu could receive a 5% merit increase every year while Rob was receiving 2.5% increases, and it would still take her years to catch up.

Chris pointed out that the different trends in employee movement are also a factor; men are more mobile, and that also adds to the gender pay gap. In large companies, he said, you’ll have women with longer tenure and their pay doesn’t keep pace with the market. So if a company is hiring in more men, and their pay is not in line with the current employees, then people who are loyal to the company may be earning less than people you have recently hired.

Q: What are best practices for companies implementing U.S. disclosure of pay ranges and job postings, particularly for jobs that can be filled remotely across multiple states?

A: “Do you want to pay the same to an employee doing the same work?” Chris responded. “They provide the same amount of value; it’s the right talent that you want regardless of where they work. Or do you want to maintain your geographic differential? Make sure that you’re transparent about that.”

Chris advised that the best practice is to:

“Where we see a lot of issues is when exceptions become the norm and you’re making exceptions for some people and not other people. That’s a really pernicious form of discretion that enters the process, and that discretion is where bias comes in. Adjust your policy if it’s not working, but adjust it in a way that’s consistent for everyone.”

Addressing geographic-based pay in a remote/work-from-anywhere culture is an area where the answers are continuing to evolve, Rob advised. He said that in roundtables held by Syndio around the country, he’s heard, generally speaking, that for jobs that can be done remotely, companies seem to be leaning toward a national rate rather than larger geo differentials, such as breaking the country up into five or ten different geographic regions.

“Geo differentials are still legit; you can control for geography,” Rob noted. “Every law written on pay equity allows for them, so it won’t present you with a pay equity issue unless you happen to have some geography with clustering of people that is a proxy for something else (such as the example above with Dorothy in The Wizard of Oz). So you just control for geography and you shouldn’t have an issue there. It might present morale issues, but not legal issues.”

(Note: Syndio offers a feature in our software called Pay Finder™ that helps with pay ranges and pay transparency rules, allowing you to set ranges using the equitable range and your internal range.)

Q: Can you comment on the recent articles saying that in some cities, young women are making more than men? Is that a sign that we are closing the gap?

A: “In certain locations, we’re seeing entry-level female employees making just as much, and in a very few cases, more, than their entry-level male peers,” Chris observed, while noting that it’s not occurring in that many locations. In most of the United States, he said, if you just pick a typical man in the workforce who’s less than 30, he’s going to make more than the typical woman. But he pointed out that’s not the case everywhere, which is exciting, and could indicate that we’re seeing a generational shift. “It could mean we’re not going to have the same sort of gendered impact in the workplace as this cohort matures and gets into management and leadership positions,” he observed.

“But I would say if we’re going to stay the course that we’ve set where this generation of people is going to have much more gender equity in the workplace, we’re going to need to be intentional about it,” Chris concluded.

“It’s going to take all of us, including those of us who work with those employers, to ensure that we’re creating an environment where everyone has the same opportunity to learn, grow, develop and find a balance between their work life and their personal life.”

Q: Does talking about the fact that you have a median pay gap damage trust with employees?

A: Maria pointed out that not only does the latest Edelman Trust Barometer show that business is the most trusted institution in the survey, but that the big difference this time is how drastically trust in other institutions has dropped off. “So really, business is the last institution that people are even willing to give a chance,” she commented.

“The way that I see that is, as leaders, we’re on a very short leash in terms of being able to keep our people’s trust. But we have an opportunity and a chance to do even better. So I think doing things like communicating about pay equity and your median pay gap, that’s the absolute number one way to garner trust from your people.”

“I’m not giving you legal advice,” Maria added. “I’m saying that there is something to being vulnerable and explaining ‘Here’s where we are, we’re going to be really honest with you, especially on the median pay gap. We have work to do.’ Every company will have work to do. Nobody’s going to be perfect, especially if you’re looking across gender, race, ethnicity, and everything that is required with the latest legislation.”

“But [if you say], ‘Here’s where we are, and here are the concrete steps we’re going to take to get better’, you’re engendering your people to trust you and to believe you. And that is where they will give you trust in return. And that’s really table stakes in terms of having any sort of workplace that focuses on diversity, equity and inclusion. So that’s what we’ve seen to really set the stage for trust and continuing to get trust amongst our customers.”

This is a brief summary of a portion of the workplace equity best practices shared by the team in the webinar. Want more?

Watch the On-Demand Webinar Read Part 2
The information provided herein does not, and is not intended to, constitute legal advice. All information, content, and materials are provided for general informational purposes only. Links to third-party or government websites are offered for the convenience of the reader; Syndio is not responsible for the content on linked pages.